Open brainstorming: Where does human/people-scale end?

Once again, hope this is allowed. Feel free to move to a more braindump-y, out-of-the-way category.

• We should retain the ability to just create our own nodes (node being a fedi instance, a particular open source project, etc). But not everyone is cut out to be their own admin and that is okay. A good balance would be human scale; most people will pick a node, but some people can just create one. Where admin =/= celebrity.

• To retain our ability to pick instances, network effect needs to be reduced. Things that create network effect include: social networks, digital economy. Federation and decentralisation (and for things that can’t do that, usually public utilities become the solution) are useful here.

• One worry is instances being too big and becoming “allowlist only” such as gmail or Google Talk. To prevent this, we need a ton of nodes. Human scale comes into play there again. One good thing about admins being community members; they don’t want the server to be too big either.

• But what about things without network effects? Masto.host for example doesn’t have a network effect. Should we care about human scale there? Centralisation brings efficiencies we cannot ignore. (Related to Open brainstorming: Money, small communities and inter-community trading and communication)

Where does people-scale end? Communities? Their managed server host (e.g. masto.host?) What about their VPS providers? And what about the hardware manufactures, chip manufacturers, silicon miners and so forth? Where is the boundary?

Originally I felt the boundary would be “where network effects end” but… how does one define network effects? And people-scale comes with other benefits too (being able to talk to the creator, more humane working conditions etc that aren’t really related to network effects). But we can’t really expect smallness in things like IC manufacturing, can we?

Also, people-scale would be a more cross-species way of talking about human-scale I guess 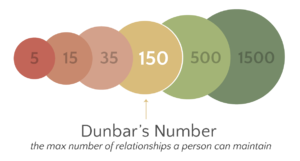 Dunbar's number is a suggested cognitive limit to the number of people with whom one can maintain stable social relationships—relationships in which an individual knows who each person is and how each person relates to every other person. This number was first proposed in the 1990s by British anthropologist Robin Dunbar, who found a correlation between primate brain size and average social group size. By using the average human brain size and extrapolating from the results of primates, h A repl...

It’s debated in the social science world, though.

Good find. Related to this is the much more informal https://runyourown.social which states that, in the author’s experience, anything above 100 people definitely does not work when it comes to finding a consensus.

It is absolutely necessary to have no more than 50 to 100 active users who log in to your online community.

This is a number I am pulling out of my ass. And eagle-eyed readers will notice that I’m not even settling on a single number here. I know that 50 is a number that works as a cap, and I think anything more than 100 definitely does not work as a cap.

In my admittedly limited experience as a human being on this planet, you are not going to be able to form and maintain a cohesive group of more than about 50 to 100 people who all basically agree on values and moderation rules and that sort of stuff. Even as a group where people are mutually looking out for each other, you are not going to be able to meaningfully make sure everyone in that group’s wellbeing is maintained. I don’t have science to back this up. I have seen this happen in startups, in activist groups, and in internet forums.

In the world of startups this is sometimes referred to as the problem of keeping your culture as you grow. I often hear people lament, “I miss when our company was just ten/twenty/fifty people.”

I can confirm the sentiment.

Perhaps a good rule of thumb is a size, where you could live by paying back each other a favour?