...but decentralization is right behind it.

This article presents an argument that the cycle of centralisation (due to snowball effects [network effects, economies of scale {which also include things like shared blocklists on the Fediverse}]) and decentralisation is inevitable.

What is a scale-free network?

It shows that the scale-free networks get created, and that it is natural; that there is some sort of evolutionary force pushing towards scale-free networks. Scale-free networks follow a power-law; imagine a graph of Node Number against Number Of Connections, and arrange the nodes from the highest number of connections to the lowest, and a power graph will form.

Confusion point: The article seems to conflate scale-free networks with centralisation. Is this correct?

This is something that p2p projects have repeatedly rediscovered. Flat networks perform poorly. Hubs are efficient.

Peer-to-Peer (P2P) networks have grown to such a massive scale that performing an efficient search in the network is non-trivial. Systems such as Gnutella were initially plagued with scalability problems as the number of users grew into the tens of thousands. As the number of users has now climbed into the millions, system designers have resorted to the use of supernodes to address scalability issues and to perform more efficient searches.

The average number of hops on a scale-free network is log(log(N)) for two random nodes, as opposed to a randomly-generated network where it is log(N).

Discussion point: Why do we need to care about “two random nodes”? For example, if we only care about nodes surrounding us (i.e. local culture), isn’t it more efficient to have it be more distributed? 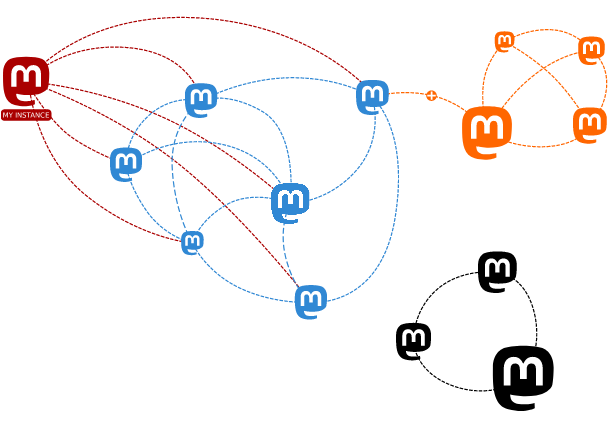 In an ideal distributed internet, we might all run personal servers from a closet. But we do not live in an ideal world, and running a reliable server is difficult. Computers crash, hard drives die, traffic will spike and your server get swamped. This is why people don’t want to run their own servers, and never will.

So, servers go down sometimes, and some go down more than others, and this is another reason scale-free networks emerge. Reliability, scalability are selection pressures. Fitter nodes attract more connections just by virtue of staying alive. Eventually this results in hubs. This is the Fitness Model of scale-free networks.

What about technological solutions like YunoHost, or in some cases where some nodes going down is not that big of a deal?

Hmm. My thinking is this. You have a ratio: PeopleDoingThings to PeopleUsingThings. Making things easier lowers that ratio. But it’s unlikely to be 1:1 (full P2P). Therefore, making things easier reduces this “selection pressure”, but communities still need to be formed – someone needs to be the admin, learn the skills to be the admin. The point is to make it easy enough that anyone can learn to do so on the side (and in the case of OSS it is definitely not easy enough).

However, there are articles saying otherwise. This one says that, while on the whole the internet it does follow the power law, it actually varies across more local categories, and is closer to a unimodal (imagine a graph with a single bump) distribution.

Winners don't take all: Characterizing the competition for links on the web

As a whole, the World Wide Web displays a striking “rich get richer” behavior, with a relatively small number of sites receiving a disproportionately large share of hyperlink references and traffic. However, hidden in this skewed global ...

As a whole, the World Wide Web displays a striking “rich get richer” behavior, with a relatively small number of sites receiving a disproportionately large share of hyperlink references and traffic. However, hidden in this skewed global distribution, we discover a qualitatively different and considerably less biased link distribution among subcategories of pages—for example, among all university homepages or all newspaper homepages. Although the connectivity distribution over the entire web is close to a pure power law, we find that the distribution within specific categories is typically unimodal on a log scale, with the location of the mode, and thus the extent of the rich get richer phenomenon, varying across different categories. Similar distributions occur in many other naturally occurring networks, including research paper citations, movie actor collaborations, and United States power grid connections. A simple generative model, incorporating a mixture of preferential and uniform attachment, quantifies the degree to which the rich nodes grow richer, and how new (and poorly connected) nodes can compete. The model accurately accounts for the true connectivity distributions of category-specific web pages, the web as a whole, and other social networks.

What are we talking about?

For a timely example, let’s say we’re talking about Mastodon servers. First of all. Do we care about centralisation?

The article claims that centralisation is inevitable due to…

Use it or lose it

If we don’t make small servers/projects etc… the focus on big things, even if technically we can switch away, will eventually cause much effort in switching away.

So much food for thought. Thanks! I will have to process this and set a bookmark to eventually come back with an answer.